The Prenatal Cradle Plus

There were very few products I felt like I couldn't live without during my pregnancy. In fact, there were really only TWO products that I would consider "must-haves": the Prenatal Cradle Plus and the Leachco Back 'N Belly Pillow (which I'll devote an entire post to in the near future).

For today, let's talk about the Prenatal Cradle Plus—which from here on out will be referred to as the PCP.


Yes, this thing is the most ridiculous-looking contraption ever. When I first saw it, I thought it was a sort of mountain-climbing gear for pregnant chicks. But no, it's something that you actually need (if you were as uncomfortable as I was walking around, that is).

Before I was halfway to my due date, I started feeling like Baba G was going to—for lack of a less disturbing visual—fall out. I also caught myself walking around with both hands under my stomach, trying to hold it up. I knew I couldn't go on for several more months like this, so I paid heed to the advice in my Expecting 411 book (a GREAT book, by the way), which claimed that a support garment such as the PCP was the way to go. And they were right.

After I put this thing on, I was extremely mad at myself for not buying one sooner. I would've been so much happier. It makes you feel like you're more compact—that's the best way I can describe it. During the first few months I was wearing it, I'd almost forget I was pregnant. Near the end of my pregnancy, I was never without it.

Also, while it's meant to help most while you're walking around, I wore it constantly. Since I'm a writer, I spend the majority of my day sitting down, and I still feel like it helped. The worst times for me during my pregnancy were when I was in the shower and had nothing to help hold my stomach in and up. So I would clamor for the PCP as soon as I dried off.


If you don't think you could stand the jock-strap-ish thing, fear not! You don't even have to get/buy that part. I wanted it, but it's the "Plus" in the Prenatal Cradle. Without it, the garment looks like this:


Here's something I learned: that jock-strap-ish thing provides "V2 support." You can click here if you really want to know what that is.

There are two downsides to the PCP:
1) No matter what the marketing copy on the packaging says, it's REALLY tough to hide this thing under your clothes. I was lucky in that I was at the end of my term during the winter months, so I had sweaters that covered it up. It would probably be a lot tougher to do during the summer, but even if you only wore it around at home, I think it would be worth it.

2) If you get the V2 support piece, I can't lie, you're gonna get a wedgie. But that's a small price to pay in the whole scheme of other not-so-fun things about being pregnant.


The bottom line: I could not recommend the Prenatal Cradle Plus more highly. Every pregnant woman should buy one. It is tied with the Leachco pillow (which, once again, I'll write up soon) for the best $60 you can spend in return for nine months of comfort.

And no, I didn't take any pictures of myself wearing it. Do you think I'm crazy? Can you say "blackmail"?

Email ThisBlogThis!Share to TwitterShare to FacebookShare to Pinterest
Labels: Pregnancy

Erika (aka "e")
The Windy City, United States
I write. A lot.

What's the Deal with this Site? 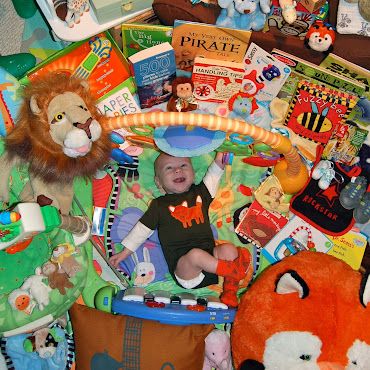 Add Baba G & Me to Your Reader

Friends of Baba G & Me